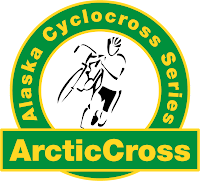 In the final race of the series, Matt Novakovich nipped Carey Grumalot at the line to take victory. John Lackey rounded out the top three. While Novakovich narrowly won todays contest, Grumalot took the series. Tiffanie Novakovich walked away with both the race and the series, accumalting an unassailable lead of 360 points. Rebecca Mamrol and Nylene Wicks finished second and third. Sara Falcone again took the top Junior Woman category and Mike Howard finished first for Masters Men.

Posted by Bill Fleming at 5:20 PM
Email ThisBlogThis!Share to TwitterShare to FacebookShare to Pinterest

Would it be possible to get my results? And who would/can I talk to about going down to do the Cross Crusades since I don't want to go alone and want to travel with someone else to do a race or 2? Thanks! ArcticCross was a blast! I miss it already.