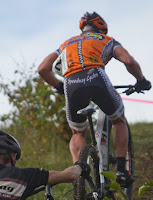 Yet another season of ArcticCross without a single race in the rain. We tried to find any mud that we could, and all we came up with was a couple of little puddles, but even with that limitation, the course was fun and the racing was competitive. The Junior Women's race was the closest one of the day, Zoee Beiergrohslein and Cadence Stull battled it out for the whole race with Cadence leading for much of the way, but a last lap push from Zoee saw the two come out of the spiral together, then Zoee put in a great sprint to save her perfect season. The Junior Men saw series leader Max Beiergrohslien attack from the start and ride to the win once again. Logan Dennis came in second on the day and secured his second place in the overall standings as well. The Master Women's field was small but quality with the top three contenders for the overall series prize racing it out. In the end, Margret Cunningham rode to the win ahead of Shannon Titzel with Jill Valerius rounding out the podium. The overall series podium would be the exact same order. The Master Men's race was one of the most exciting on the day. Mike Howard came out with a sizable lead after the first lap, netting him the hot lap beer prime. Jens Beck on the other hand had a tough start that saw him behind nearly the whole field after the first lap. As the race progressed, Mike kept the pressure on, but Jens started cutting into his advantage. With 3 laps to go Jens had finally caught up and made his move. At that point, it was all Jens who rode in for the win. Mike took second and Greg McDuffie came in third. The overall Series was similar with Jens in first, Mike second, and Dick Quinn taking third. In the Open Women's race, Amber Stull showed why she was the champion last year by taking an early lead. Behind her, Nylene Wicks and Tiffanie Novakovich gave chase with Laurel Brady not far behind. As the race went on, Amber seemed to widen her lead and Nylene got a bit of a gap and was chasing alone in second. In the closing laps though, Tiffanie recovered and passed Nylene, and pulled back to within 25 seconds of Amber. The final podium was Amber in first, Tiffanie in second and Nylene third. Overall, Nylene had done enough to hold on to the title, with Tiffanie moving up to second and Laurel Brady coming in third. The Open Men's race was another good one with all of the top 10 contenders present. After a half lap that saw Will Ross fallout of contention with a mechanical issue, it was apparent that it would be a 2 man race for the win between Carey Grumelot and Brent Gorman, who won the first lap beer prime. Behind them and with some space between us the chase consisted of Dan Nordendale, Me, Tim Berntson and after a bad start Jeff Ellis was a little farther back. Dan set a fast pace, but Tim managed to catch back on, while Jeff was also clawing his way back into contention. I fell off the pace just as Jeff caught up, and pulled through to put the pressure on Tim and Dan. Up ahead, about half way through the race Carey got a gap on Brent, and didn't look back. He soloed in for a seemingly easy win with Brent coming through over a minute later. The battle for third saw Tim get a flat tire and was forced to run 1/2 lap, at that point Jeff put his attack in and opened up the gap to finish just under a minute ahead of Dan. Tim recovered and rode in to finish 5th. The overall series honors were again similar to the final podium on the day, Carey in first, Brent second and Tim taking third. Thanks to everyone for another great ArcticCross season, without you it would just be a couple of guys wandering around a field with pin flags and surveyor tape, so thanks again, we hope you enjoyed it as much as we did. Full results below:
2011 ArcticCross #7 Results
Lost & Found:
I have a box of stuff that people left at the race, here's the list, please email me at lackey.john@gmail.com to claim any of these items:
Sugoi Coeur d'Alene Ironman jacket
Fox Digit full finger gloves
Native polarized glasses
Louis Garneau helmet
The Sport Shop triathlon number belt
Swix pants
Sugoi insulated cycling cap
Sportful arm warmers
Pearl Izumi fleece lined tights
Camelback REI 500 ml water bottle
Nylon Lined throw blanket
Misc water bottles
Posted by John at 9:17 AM
Email ThisBlogThis!Share to TwitterShare to FacebookShare to Pinterest